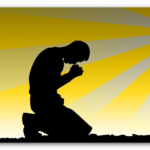 I AM the GOD above all. I AM. I AM the GOD who makes the most out of it, for I AM always active in creation by My Spirit and Holy Son and holy angels and holy ones/saints, according to Our holy plan and words and will and revelations and prophecies etc. I AM. Many have turned their back on Me. But soon they all will bow their knees before My throne and the throne of My Son Yeshua ha Mashiach. For the time of Our heavenly judgements have come, which will bring many to their knees on earth… or in the kingdom of death/scheol/hades… or in Our Presence on earth… or in heaven. I, YHVH GOD, AM.