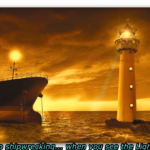 This says GOD YHVH, the GOD of Israel :

Hear, o Israel, the days are near that I will visit you by My holy two prophets. I AM. They will appear dressed in sackcloths . I AM. They are the two olivetrees/lampstands which stand in the presence of Me and My heavenly Mashiach. They will prepare you for the true Mashiach, who will come down from heaven with all His heavenly armies to return to the Mount of Olives, where He was also taken up into heaven before the eyes of His followers in His time. I AM. You know who He is, but denied Him during all the ages. I AM.