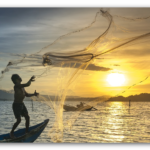 I, YHVH GOD, was activ during all ages by means of My Spirit and words and revelations and prophecies and dreams and visions and powers etc. “Still many were not reached with My gospel” , some said. But I tell you, that My works were throughout all ages… and all generations were reached with My holy gospel by My holy messengers. Many of them are denied by some history-writers. Many of them were slain like their Master. I AM. Many are now on the road for Me and Jesus the Christ/Yeshua ha Mashiach. I AM. Many preach and teach and… evangelize and prophesy and reveal and share dreams and testify about Us and their experiences with Us… and many are shepherds of the flock of Christ Jesus. I AM. But the time will come, that many will fall away from the truth of Our words and holy testimonies. I AM. Soon you will see it, when the Anti-Christ Beast-system will be revealed in all its satanic/luciferian deceiving evil powers. I AM.