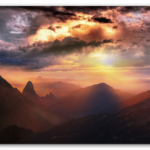 “I AM the I AM, the GOD of creation. YHVH is My holy name forever. I AM. Many seek Me in these days, because of the iniquity they are confronted with. I AM. But the Revelation will be fulfilled. I AM. Many will follow the anti-christ/other christ and Beast in future days and will choose for the injection/mark/sign/name/number/sign/tattoo of the beast… and the number of his name is 666. They will be thrown into eternal suffering/second death. Their love for money, worldly pleasure and fulfillment and satisfaction and their will to stay alive… will lead them to eternal destruction and suffering. Jesus words will be fulfilled. He says by My Spirit/Ghost : “Those who love their earthly lives more than God’s truth… will choose for the lie of satan… and will become his slaves/sons and daughters… and will go lost for all eternity.”