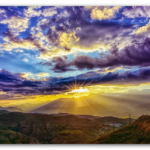 “I AM the I AM, the GOD of the heavens and the earth, the GOD of Israel, the GOD of creation. I AM. Many have heard about Me and My Reign in creation. Many did/do not believe Us nor Our words nor revelations nor prophecies nor dreams, for they were/are hardened in their hearts towards Us by means of the lies and deception, that were/are spread in creation by Satan and the evil spirits… and those who are their slaves. I, YHVH GOD, AM. Many were/are hardened, because of their own choices and rebellion against Our holiness and holy will or words. I AM. Many will be humiliated when they will be confronted with their evil and sinful nature and mindset and evil words and deeds. I AM. For We are the GODS/Elohim above all… and We will seek to lead all to repentance by means of Our holy Ghost, who will convince the world of sin, righteousness and judgement. I, Adonai YHVH-GOD, AM.”